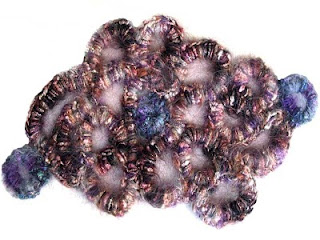 here is my latest blog scrumble. am visiting NYC at the moment, and heading out shortly for a class...so no time to write about it at present. if you have any questions about how this one is made feel free to ask, and i will get back to reply in a day or two.
Posted by Prudence Mapstone at 4:17 AM 8 comments: 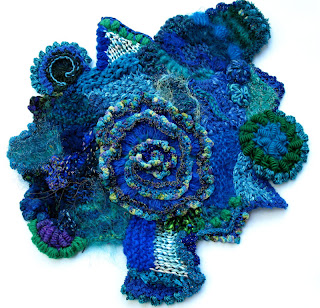 This week's scrumble started with the crochet spiral flower in the centre.

Similar to those described in my 'never too many Handbags' book, it has a single colour base, then surface stitches are worked into the back loops of the stitches in the previous round of the spiral.

Once it was the desired size, I worked rows of slip stitches for surface embellishment.

I then picked up stitches and knitted various small areas outwards from behind the spiral.

Other crochet stitches were added between the knitted areas, and onto their edges. 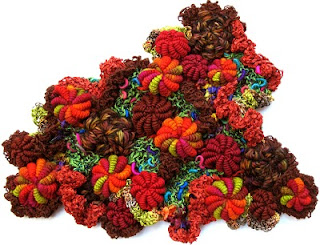 Gosh, I just realized that the 2nd week of January has flown by already...

...so much for the new year's resolution to try to keep this blog on track! Will have to aim to do better next week; but anyway, here is my next completed scrumble, and this time it is a combination of both crochet and knitting.

Lots of bullion circles, crocheted in a commercial cotton and a hand-dyed wool that was a gift from someone who has taken a number of workshops with me over the years (many thanks, Sheryl). Both of these yarns had just the right twist to work wonderfully for this tricky stitch, and so they easily produced lots of nice, neat rolls (using the best yarn for the job isn't really cheating!!). I also added 3 other circle motifs made with block stitches.

The other yarns are all very fine in weight; the green cotton used in the small knitted areas contains what looks like its very own bullions - little slubs of cotton in other bright colours that came twisted into the yarn at random intervals...this yarn came on a cone and has been in my stash for at least 15 years!

I finished this scrumble off with lots of small ruffles, crocheted with various paper yarns and silk embroidery threads.
Posted by Prudence Mapstone at 3:54 PM 4 comments: 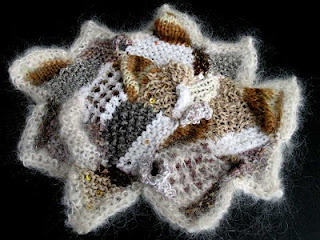 Yes, I'm actually back!
and I'm going to do my best to find time to create and blog about another scrumble each week

so here is week 28, the first for the new year

This is a scrumble that is 100% knitting - not a crochet stitch in sight! I have used a variety of different knit stitches including garter, rib, moss, double moss, slip and reverse stocking stitch.

This scrumble was started with the small garter stitch rectangle near the top, the piece that is worked in the white cotton yarn with beads. From then on, each new area of knitting was picked up along the edge of a previously made section. Some of the sections were bent over and caught at the back of the work when the cast-off row was worked, forming small bumps and pleats and creating a more textural effect.

I added the white mohair border using a continuous strand of yarn, by picking up stitches along the side of each peak with the right side facing, working a single row of knit stitches, and then casting off on the following row. When I was back to only 1 stitch on the needle again, I picked up more stitches down the other side of the peak, or up the side of the next section, until the border completely surrounded the piece.