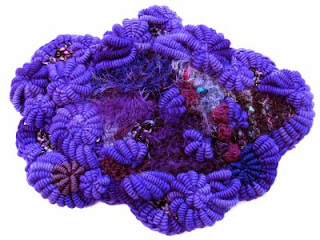 see, I promised I'd have this next one up soon after the last! so I'm pretty much all caught up again now, I think.

So, what's a girl to do when she finds a ball of lovely lofty wool yarn that has been spun as a single and dyed a gorgeous purple...why, crochet lots of bullions with it, of course!

you have to admit that this type of yarn really is ideal for them. overuse of the crochet bullion stitch - who, me??? ;-)
Posted by Prudence Mapstone at 1:39 PM 6 comments: 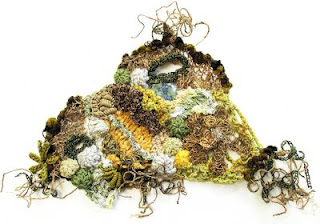 This week's scrumble is made with cotton, wool, silk, hemp, a few odds and ends of a Japanese paper yarn, and some man-made fibres. The rough hemp twine gives an interesting contrast to the other yarns, whether crocheted (as in the beaded flower on the right) or knitted (the sections at the top and left-hand edges). I am currently working on a much larger project that incorporates this yarn, and even though it is a little difficult to work with (a bit rough on the hands and overtwisted) I am enjoying seeing how it reacts to different stitches.

I was running a little bit late with this scrumble, but I almost have Week 22 done, too, so that one should be up by tomorrow!
Posted by Prudence Mapstone at 7:21 PM 3 comments: 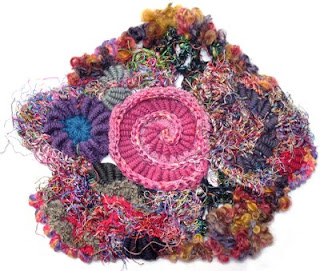 This week's scrumble is all in crochet, and I'm again playing at bullion spirals. The pink one in the centre was done using 3 different pink yarns; the base was made by working a 2 colour spiral made up of tr (US dc) in a thin wool boucle and bullions in a thicker wool crepe, all stitches worked into the back loops only of the stitches in the previous round. The front loops were then embellished with sl sts in a shiny, variegated pink rayon ribbon yarn.

The purple double circle (which alternates bullions with tr in the outer round) was attached to the edge of the spiral using a few crochet slip stitches (this slightly distorted the spiral's shape). Then more random crochet was added around the central motifs - I used a bit of cotton, some wool, a soft looped mohair and some dark green manmade sparkle, but mostly it was with a handspun recycled rayon-mix yarn from Nepal.

The yellows in the variegated looped mohair actually blend in better 'in the flesh' than they appear to do in the photo.
Posted by Prudence Mapstone at 10:22 AM 3 comments: 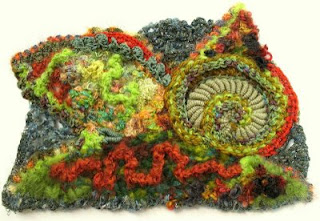 Last week while travelling I came across a reference to psiloceras planorbis - ammonites from the Jurassic period that can be found fossilized in rocks in the south eastern areas of Wales....so for week 19's scrumble I have incorporated a crochet ammonite-like spiral shape set amongst a loose interpretation of some of the shapes and colours of the Welsh countryside. Mohair and other soft, hazy yarns were used to mirror the muted blending of even the stronger colours that were often apparent in the spring landscape.
Posted by Prudence Mapstone at 6:21 PM 3 comments: 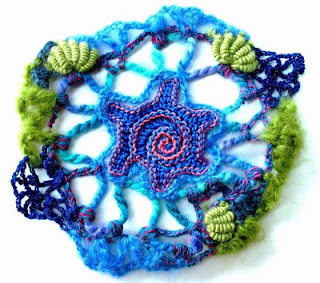 I have spent the past couple of weeks in Wales and England, where the colours of the landscape have varied from the muted browns and greens of misty hills to the more vibrant greens of new folliage and the various colours of spring flowers...but one of the small bags of mixed yarns that I had brought with me has insisted on working itself into a more tropical ocean theme - as I have noticed many times before, freeforming sometimes just has a mind of its own!

Week 18's scrumble began with the crochet spiral motif in the centre, worked in blue cotton and later embellished with slip stitches in pink. A row of softer blue chain stitches were worked between the points, and then a very thick yarn was threaded through some of the chain stitches, leaving large loops sticking out from the edge. I then crocheted around the perimeter using a thinner blue and pink mix yarn, using short stitches with chains in between. These stitches were worked from the wrong side of the piece, as were the green and blue mohair additions around the edge and the majority of the dark blue and lurex lacy sections, but the bullion stitches in between were made from the right side, using a chunky pale lime single-ply wool.

I imagine that a much more 'English countryside inspired' scrumble will make its appearance here in a week or two ;-)
Posted by Prudence Mapstone at 12:07 PM 3 comments: