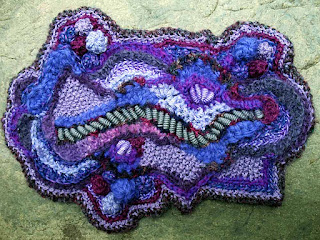 It started with the strip of crochet bullions in the centre, which I had just unearthed at the bottom of a suitcase I was repacking. I didn't have any other grey yarn on hand, so decided to create a purple scrumble around them....but in the light of day I'm not altogether sure if that was a particularly good idea!

This morning the grey doesn't tone with the purple nearly as well as it did in the night light...so I may need to add a few other grey bits to the surface sometime, when I come across some more yarn in that tone.

The bullions had originally been worked in a straight line, using a smooth cotton yarn. To give them a better 'flow' I intentionally skipped stitches in some places, and added extras in other spots, as I worked the other yarns along the sides. There are a few knitted sections done moss (seed) stitch using a bamboo yarn, but the rest is all crochet, mainly in wools and mohairs, plus a few little areas in silk and angora. To add dimension to the piece some of the crochet stitches were worked 'around the post', and slip stitches were occasionally worked on the surface, too, for the same reason.

The scrumble was made in one piece, by picking up and joining on the stitches each time a new yarn was added (i.e. no sewing was involved). To give it a 'completed' look I finished off with a couple of rounds of short crochet stitches, being careful to increase or decrease wherever it was needed so that the piece remained flat.

As I think I may have mentioned on the blog before, bordering a piece like this is something that I rarely do for scrumbles that are going to become part of a garment, but I don't mind doing it to 'frame' a smaller artwork.

This is because putting a 'fence' around a lot of different fibres is often asking for trouble further down the track...even if the stitch count appears to be perfect when the piece is newly completed, if it contains a lot of different yarns you could find that some are likely to relax and expand a bit whilst others might shrink and contract slightly (even just in normal wear, let alone when being laundered), and this could cause the fabric of the garment to distort and go out of shape.
Posted by Prudence Mapstone at 5:56 PM 8 comments: 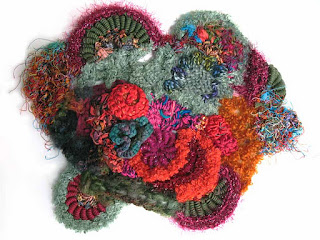 This scrumble is perhaps not quite as unusual as the last one, but still it was interesting to make.

I used lots of leftovers in pinks, oranges and greens, and most of these bits were totally used up in the process, as I only had a tiny amount of each of the yarns when I started it.

In real life, even though I have used both orange and pink yarns, the colours tone in much better than they appear to do in the photograph. For some reason the orange area on the right appears to have more yellow in the picture, and therefore looks more harsh than it actually is!

There are some natural fibres (wool, mohair, cotton and mulberry silk), some recycled Indian yarns (these were rayon, not silk), plus some synthetic chenille, a glittery eyelash and 2 types of man-made ribbon.

Some of the yarns were fairly new, but others had probably been in my stash for at least 20 years; a couple were the leftover bits from yarns I had received in an online group exchange a few years back.

There are 4 small areas of knitting, and the rest is crocheted. Even though both of the mohairs were bouclés, the chenille was softly textured, the eyelash and recycled silks were 'fringy', the wools were either slubby or hand dyed, and I used the smoother mercerised cottons for fancy bullions stitches, the scrumble seemed to still be lacking something until I added a few areas of surface crochet at the end, to give it a little more life.

As usual, I welcome your comments.
Posted by Prudence Mapstone at 11:32 AM 10 comments: 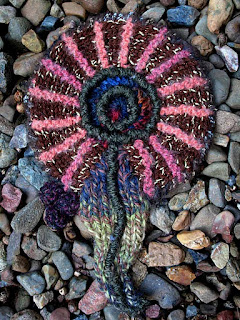 This scrumble was really interesting to make, and quite a departure from any of the previous pieces I have done for the blog.

I started by using a variegated yarn and crocheting the small central circular motif. Then I worked another circle around it, using the same yarn, doubling the number of stitches and making the second round of stitches into the back loops only of the previous round.

After I finished off the crochet I then knitted the area with the pink radiating bars of garter stitch. Working short rows in each of the brown/gold sections of stocking stitch, I shaped this knitted piece so that it would fit neatly around the crochet circle.

I intentionally cast the knitting off before it was long enough to totally surrounded the centre, and then I stitched it in place. The sewing was done into the back loops only of the crochet stitches, so that each of the circles now had a round front loops visible on the surface, and into these raised stitches I next worked the two rounds of crochet crab stitch.

Using a bulky multi-colour yarn I then knitted the 'tail' area, increasing and decreasing occasionally at the beginning or end of some of the rows, to shape it organically. Once it was finished off it was stitched into the gap between the beginning and end of the round section of knitting, and a row of crab stitch was worked onto the surface, lengthways down its centre.

Three little crochet domes attached to the edge, and a round of crab stitch right around the knitting, completed the piece.

All of the yarns used were either wool or blends with a high wool content, and were worked at a fairly tight tension, so the finished piece is quite firm and stable, and holds it shape surprisingly well.
Posted by Prudence Mapstone at 5:31 AM 8 comments: