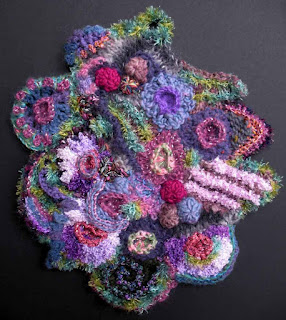 My latest scrumble has been made from quite a variety of different yarns, nearly all of which were man-made!...but there is a little wool, mohair and a soy/wool mix in there as well, to add a bit of stability between the synthetic fibres.

This one has plenty sparkle and soft texture in purples, pinks and greens....worked mostly as crochet circles (or part circles), plus a few sections of knitting, some done in stripes.

I crocheted from the wrong side and around the posts of the stitches when working the outside rounds of the double circles. This was because I wanted the centre rounds to stand out on the surface.

A lot of the crocheting was intentionally done from the wrong side of the patch, so that the fluffy and textured yarns could 'bloom' naturally towards the front of the piece.

As usual, the entire scrumble was made without any sewing. Each area was either worked directly onto an edge, or (in the case of the full circles and the spiral), were slip-stitched into place once the motif was finished (using a crochet hook and working the slip stitches from the wrong side). A few areas that were looking a little plain or flat were further embellished with crochet slip stitches on the surface, to complete the piece.

I just noticed that the number of followers here had passed the 500 mark - hope you are all getting the chance to experiment too, and having fun with your crochet and knitting!! Let me know what you have been up to ;-)
Posted by Prudence Mapstone at 11:27 PM 13 comments: