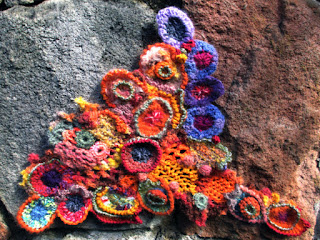 First off, a very happy and creative 2013 to everyone reading here.  I have to say I am rather proud of myself for getting around to posting a scrumble so early in the year.  Hope you like it. 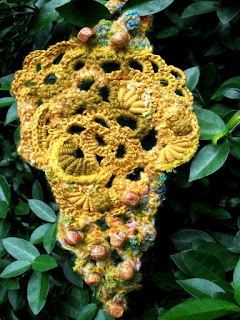 As you can probably see, this one is all crochet.  Lots of different yellow-toned yarns in cottons, wools, silks, rayons and a weird synthetic blend. This last yarn would have been just awful if used in an entire garment.  It had absolutely no stretch, and went from being a really thin thread to having thick, oddly fuzzy and almost matted sections.  It was just great for freeforming!

I started the piece by wrapping a sunny yellow rayon yarn around the tip of my finger a couple of times to create a ring-like shape, then slipped it off my finger and worked over this 'padding' to create the initial motif.  Once this circle had been filled with a round of short stitches (UK:dc/US:sc) I continued on, creating more loops, filling them as I went.  The first few were made with the same yarn, but then I changed yarns periodically, using up other yellow bits and pieces from my stash.

For each new loop I made 5 or 6 chain, then, after missing a stitch or three, I added a couple of slip stitches to attach the end of the chain firmly back onto the work.  Then I turned the piece to the other side, and filled the gap with as many short stitches as it took to completely cover the chain.

There are also a couple of small crochet domes, and a few bullion clusters.  Sometimes I worked into the tops of previously made stitches, but sometimes behind other stitches, to create little ridges on the surface.

When the piece measured about 6 inches across, I was sort of feeling that the scrumble was finished, and I went looking for the camera...and that was when I spotted a packet of printed wooden beads and the small ball of the funny synthetic yarn mentioned above.  Both said 'add me, add me', so I did.  The beads were strung onto the yarn, and I randomly pulled them up and crocheted them in place as I added a small and then a larger triangular shape on opposite sides of the piece, which elongated the original roundish scrumble into the more oval shape that you see above.