A little while back I was involved in a 'scrumble swap' on Ravelry.

Here are the 4 that I made and sent, each in the recipient's choice of colours. 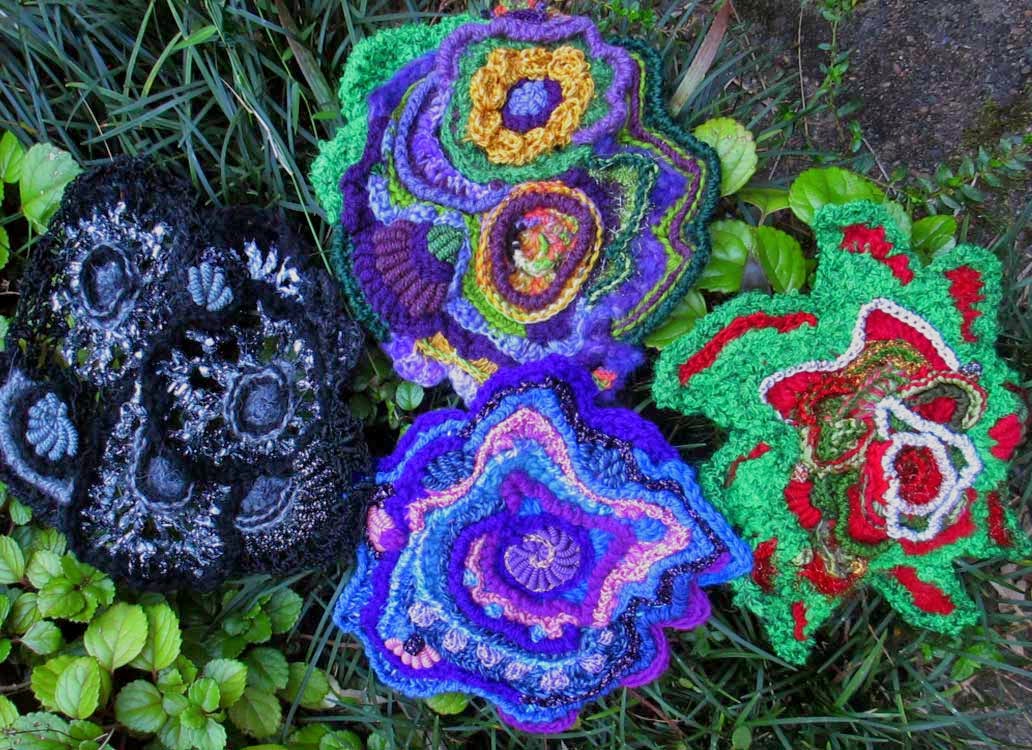 i enjoy creating small jewellery pieces; since most of my projects take months to complete, sometimes i really like to make something that can be finished at a single sitting ;-) 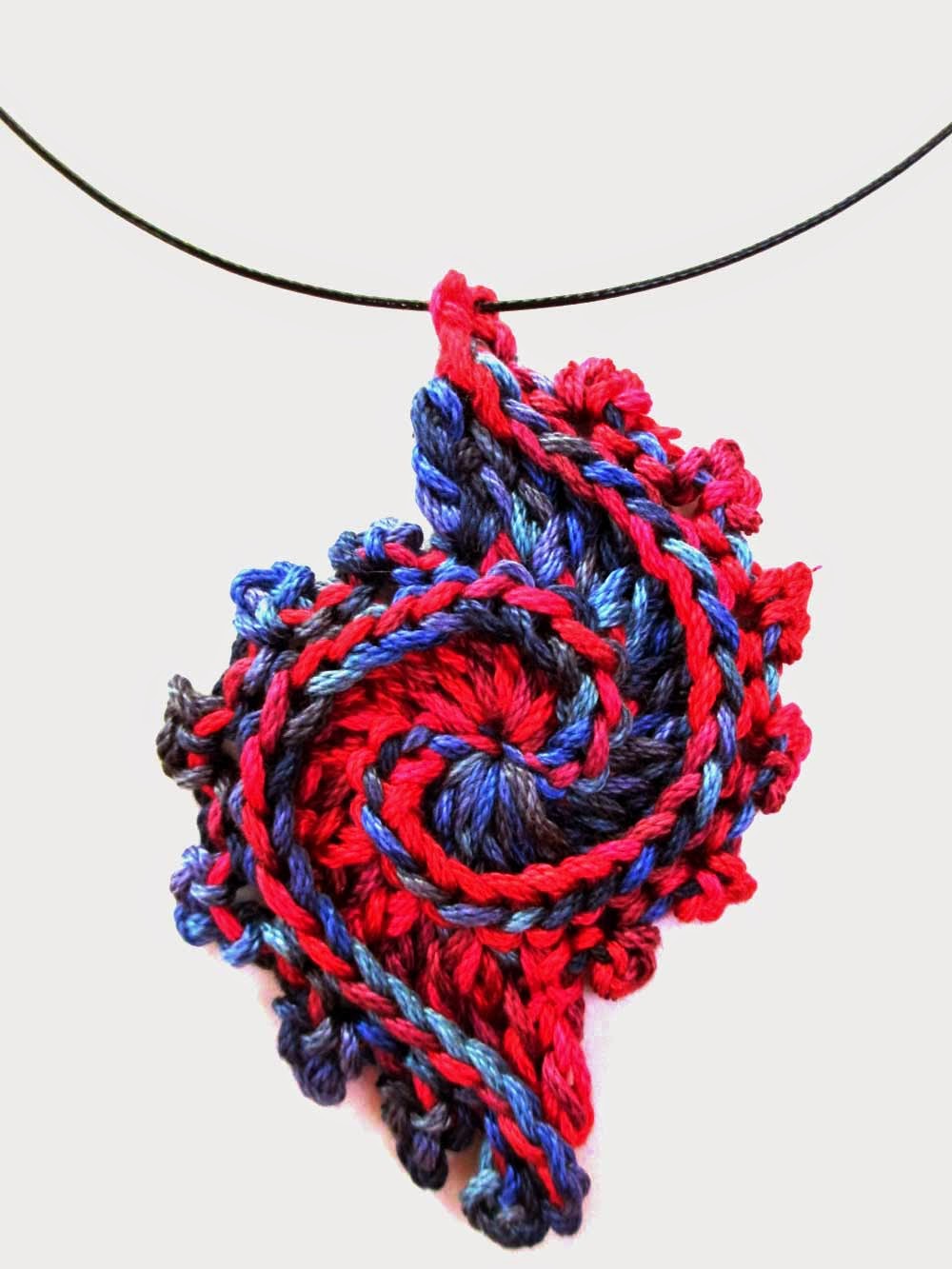 A couple of weeks ago I discovered 2 scrumbles that had been hiding in a box of yarns.  They were originally made as workshop samples, years ago.

I joined them up and revamped them a bit, and figured they were now worthy of a blog post ;-) 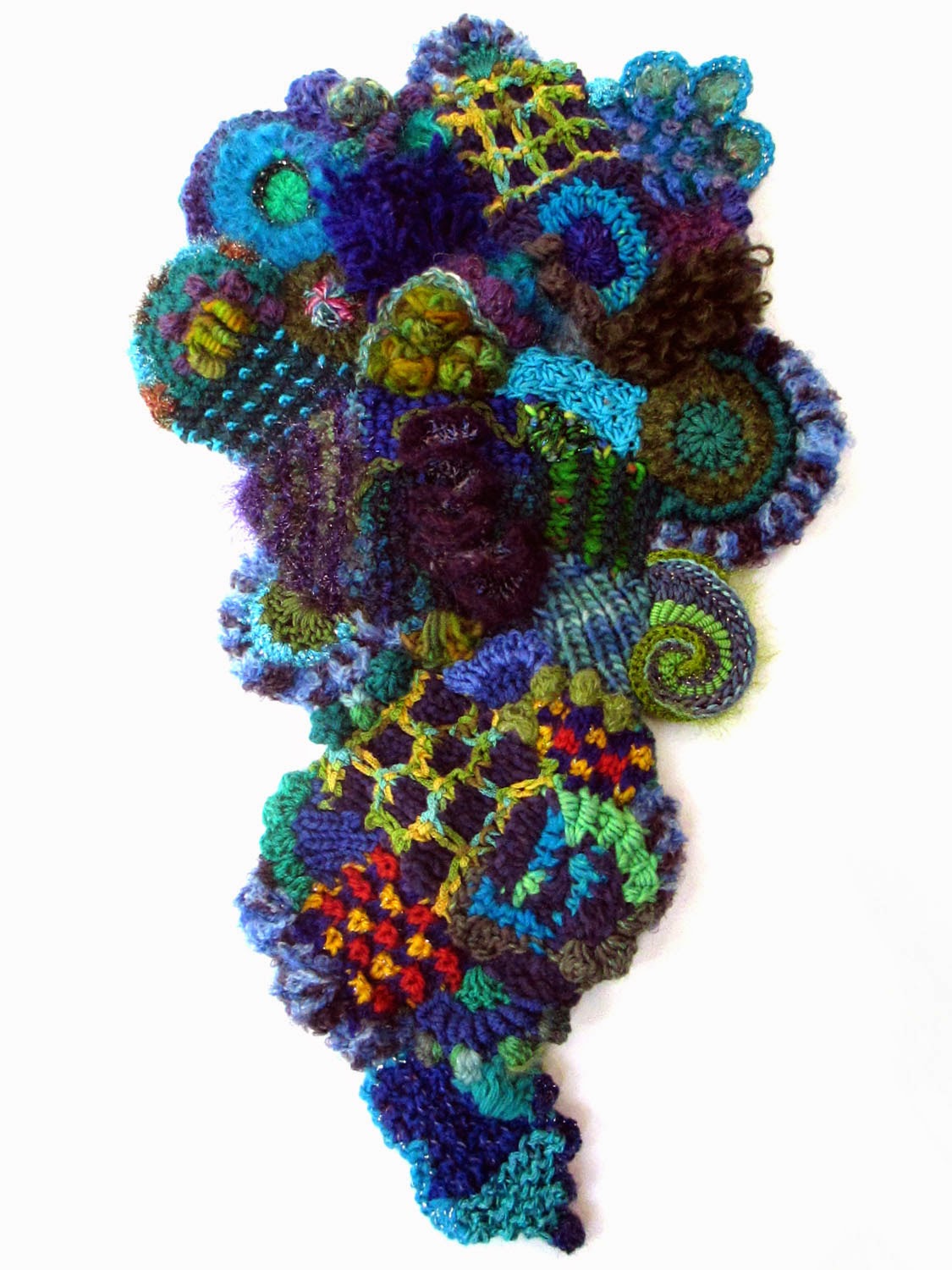 i thought i would share a few photos of the piece that i made for the latest challenge by the International Freeform Fiberarts Guild.

the theme for the challenge this year was 'one colour', and as you can see, my chosen colour was green.  i would have loved to have had time to create an entire garment, but for the moment my piece remains just a scrumble, but you never know, it might grow into something else one day.  a photo of the entire piece, plus a couple of detail shots, are below.

54 freeformers from around the world took up the challenge this time, and as in previous years, a book containing all of the challenge pieces has been put together, and it has just gone on sale.  every year we donate the profit from the sale of the book to a different charity.

Cyra Lewis has done a fantastic job of putting the collection together, and you can see a preview of the book at
http://www.blurb.com/books/5466596-one-colour

if you are looking for inspiration for your freeform creations take a look through all the preview pages there, but if you like what you see you might also think about buying yourself a hard copy, to help with the fund raising. 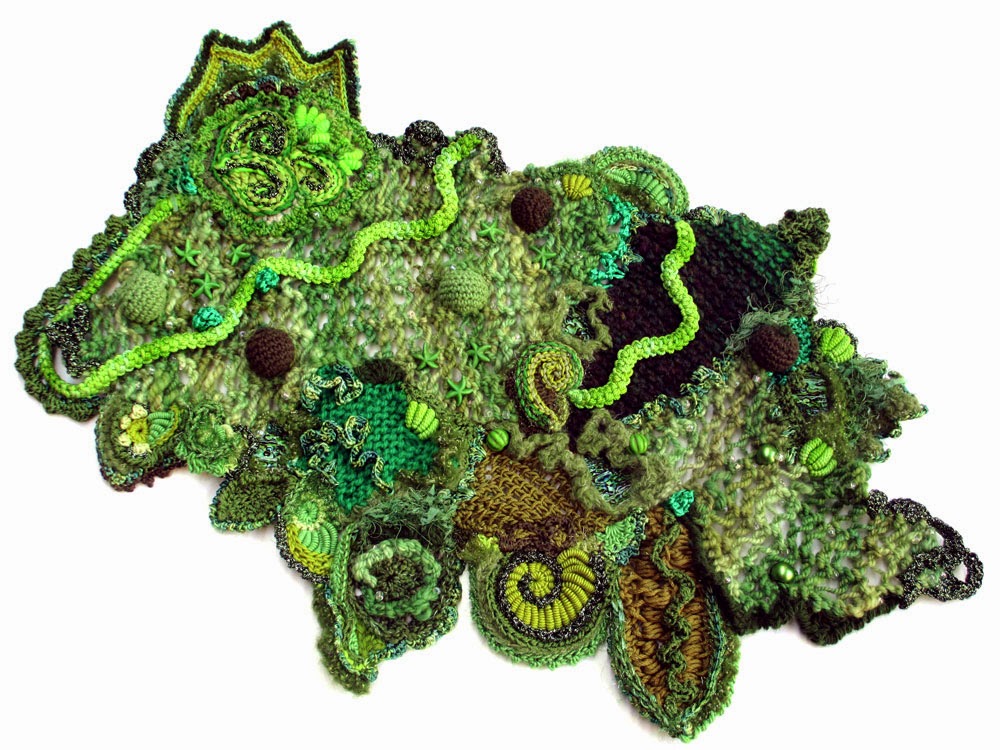 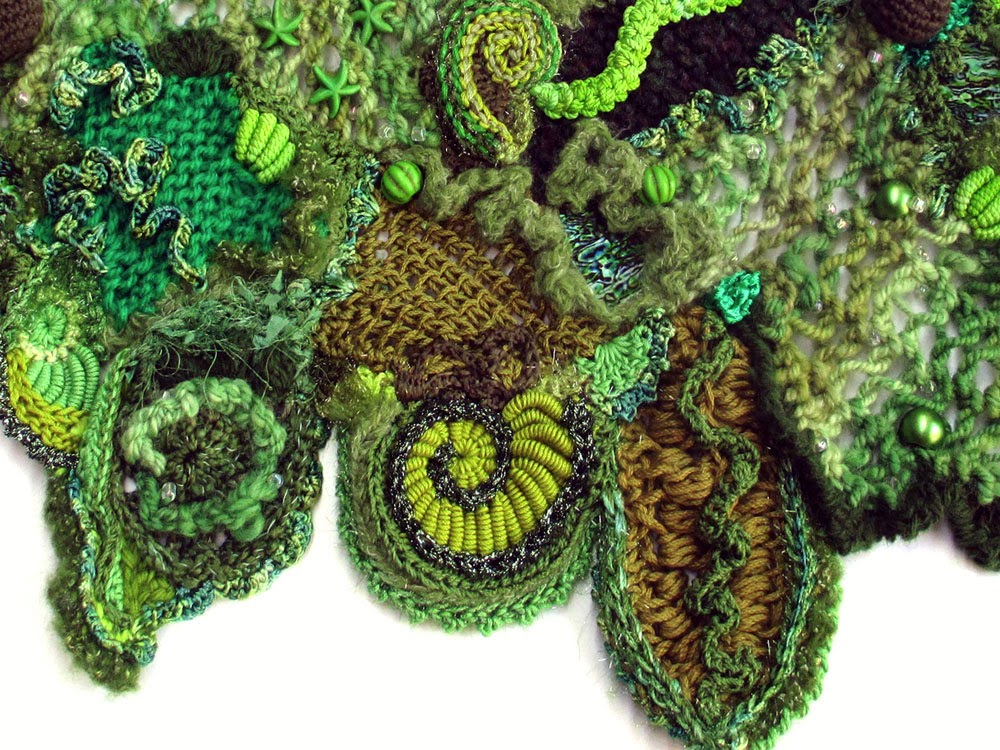 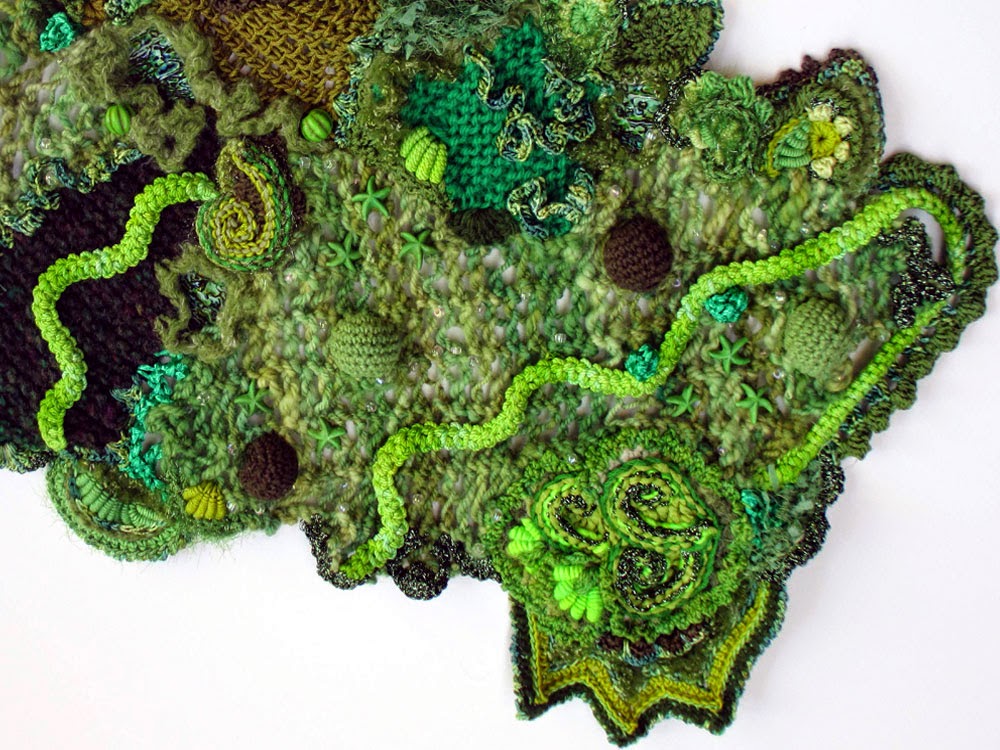 Here, at last, is scrumble #52...a rather seaweed-ish one, even if it is rather blue.

I know that I didn't manage to make them very 'weekly', but had I done so, this would have brought us up to the end of the year.

So now a question...do you want me to intermittently keep them going? or have you had enough ;-) 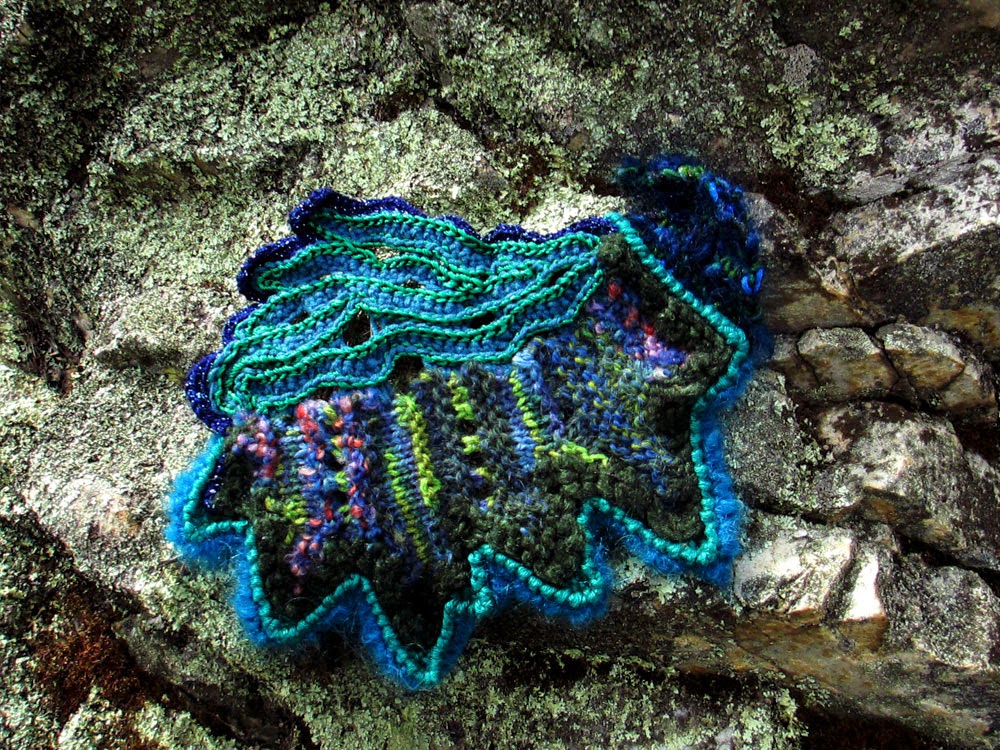 Well, I guess you may have noticed that I didn't actually get the last 2 'far-from-weekly' scrumbles  done nearly as quickly as I had hoped.

I see that I promised them nearly a year ago.  Ooops! ...sorry about that...where does the time get to?

I did finally finish both a couple of weeks ago, and took photos while I was travelling down south, but am only now getting around to posting the first of the pictures. 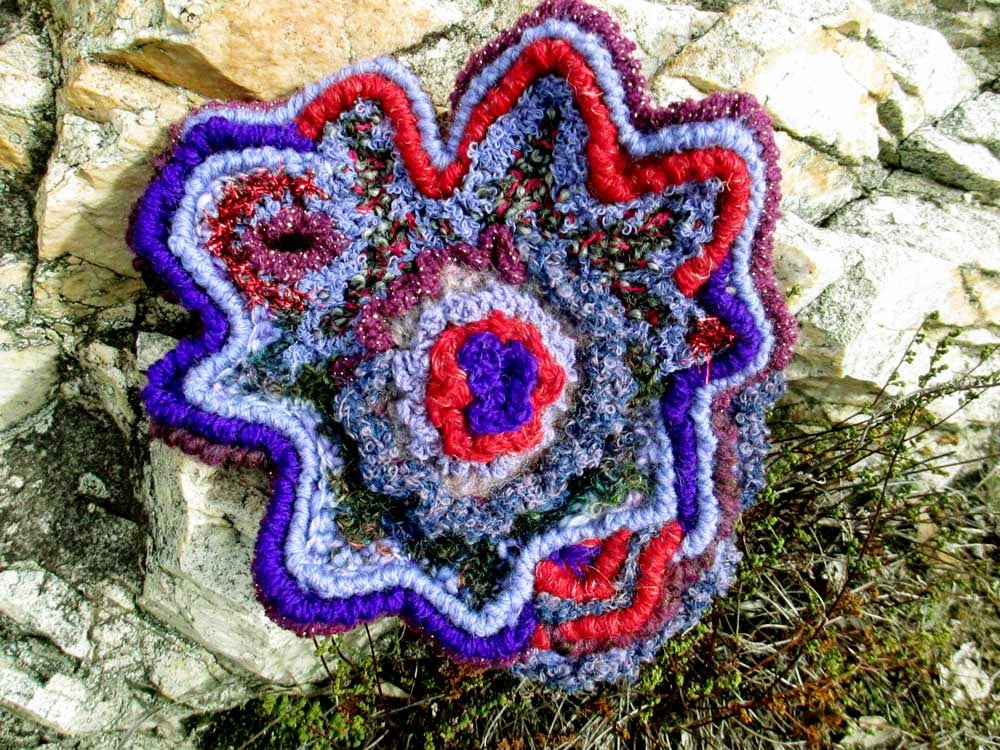 Anyway, here is the first, and a bit about how it was done:

All crochet.  Mostly wool, or wool blend yarns; some smooth, some bouclé.
Vaguely circular in construction, but changing the height of the stitches in each 'round' created lots of peaks and troughs around the edges.
Most of the stitches were worked into the back loops only of the stitches in the previous rounds, so that the front loops could be used later for a bit of surface embellishment. A few ruffles were added at the centre; some raised crab stitch (reverse single crochet) helped to add definition around the outside.

Many thanks to everyone who is still hanging in there and following this rather quiet blog.